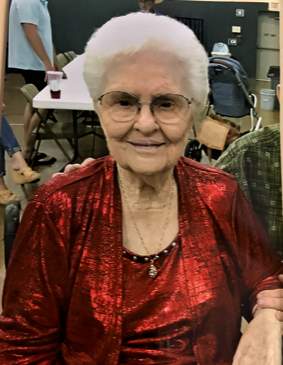 Wanda Louise Anderson Talley passed away peacefully on Saturday morning, January 30th at the wonderful age of 96 years and 4 months with her family nearby.  Wanda was born on September 29, 1924 in Delta County to Kenneth Wesson Anderson and Ruby Louella Gentry Anderson.  After the passing of Kenneth, Ruby married Mel Brackeen in 1930.  Wanda had two brothers; Charles Robert Anderson and wife, Georgia and Loyd Earl Anderson and two step-brothers; Melvin “Buck” Brackeen and wife Minnie and Erston “Mickey” Brackeen and wife Joyce.

Wanda married Charles Wesley “Chock” Talley on February 17, 1944 in Cooper, Texas.  They began their married life during the height of World War II.  Chock was soon deployed to Florence, Italy where he served as an ordinance specialist. After the war, Chock and Wanda began their life together in Dallas, Texas.  Chock worked as a crane operator and Wanda handled the bookkeeping for the same company.  In 1971, they built their home on SE 5th Street in Cooper, Texas and moved back home.  Wanda owned a dress shop and Chock drove a truck delivering diesel for Dutch Horchem.  Later they owned and operated a used furniture store on the east side of the square until they retired.  Chock and Wanda were members of the First Baptist Church of Cooper.

Wanda was preceded in death by her beloved husband, Chock in 1992; as well as her parents  and all of her brothers and their spouses.

Wandy Talley will be laid to rest on Tuesday, February 2nd at the New Klondike Cemetery.  The graveside service will begin at 2:00 PM and will be officiated by Pastor Johnny Witherspoon.  Pallbearers will be Jeff Landers, Ken Wright, Loyd Lennon, Jeremy Anderson, Anderson Grimes, Dave Koenig and Jay Daughtrey. The family has asked that in lieu of flowers donations be made to the Delta County Hope House.

It is requested that mask be worn and social distancing be observed during the service.

To order memorial trees or send flowers to the family in memory of Wanda Louise Talley, please visit our flower store.