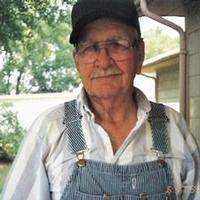 Ray was born in Campbell, Texas on September 23, 1920, to Viola Harrison Robertson and John Houston Robertson. He was married to Joyce Williamson Robertson and was a United States Army veteran serving during WWII. Ray enjoyed old cars and was in the Model A&T Club.

Survivors include his wife, Joyce; his sons: David Kirk of Rowlett and John Hughes of Cumby; his daughters: Ann Smalley of Campbell, Jan Denney of Holley Lake Ranch, Missy Skog of Texarkana; his eight grandsons; his five granddaughters; his nieces: Dot Brewster, Jo Ann Morris and Sue Bordovsky and his brother, Robert Robertson.

He was preceded in death by his parents: John and Viola Robertson, brothers: J.B. and A.B. Robertson, Morris Robertson, sister, Lula Quisenberry and his granddaughter, Wendy Smalley.

Graveside services with military honors will be held on Thursday, April 13, 2017, at 2:30 P.M. at Brigham Cemetery in Campbell.

In lieu of usual remembrances the Robertson family would appreciate memorials being made to the Fred Ende Lodge of the Odd Fellows in Greenville.

To order memorial trees or send flowers to the family in memory of Wallace "Ray" Robertson, please visit our flower store.