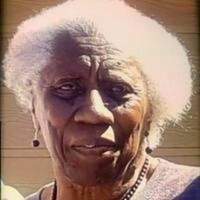 On Friday, December 6, 2019, Veda Bell Stevenson made her heavenly transition. She was born on February 7, 1934, to the parentage of Mr. Robert Louis Stevenson and Mary Holloway. Veda was born in Honey Grove, Texas. She attended Bralley Pendleton. Veda played basketball in high school, and she was very good at it.

Veda liked to straighten and curl hair in her earlier days. She didn't get her license as a beautician, so she decided to become a seamstress. She worked many years for Bonham Manufacturing, Fannin Manufacturing, and she retired at the Banner in Honey Grove. When she wasn't sewing for the companies, she was sewing for her family. She was always a very hard worker.

Veda accepted Christ at an early age. She attended "The Little Blue Church" which is now called Christian Chapel. While attending Christian Chapel, she served as a trustee and stewardess. She worked in the kitchen as long as she could as well. Veda continued to serve in those positions until Alzheimer's symptoms developed. She was diagnosed around 2007 or 2008. Although she had the disease, she never forgot how to pray. She lived alone until the disease progressed, and she had to be admitted into the Honey Grove Nursing Center in 2015.

Veda was a very loving and caring individual. Her children were always supported by her. She sacrificed a lot to make sure they were taken care of. She will be sorely missed by her family and the many friends that she joked around with at church. She was always making someone laugh about something. The last week of her life was a little tough on her, but she breathed her last breath and went on to see her Maker. She will be missed but never forgotten. To God be all the glory!

Funeral services for Veda Stevenson will be held on Wednesday, December 11, 2019 at 11:00 A.M. at Christian Chapel CME Church in Honey Grove.

To order memorial trees or send flowers to the family in memory of Veda Bell Stevenson, please visit our flower store.