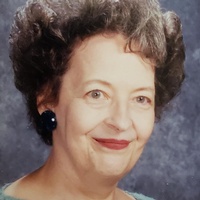 Serita Nadine Yeager of Denison, formerly of Commerce was called by the Lord to join him in heaven on Tuesday, May 8, 2018. .

Serita Nadine Hamilton was born in New Albany Indiana on January 21, 1934 to her mother, Cleo Beatrice McKown Hamilton and her father, Leslie Eugene Hamilton. She grew up in a Christian home with her mother as a college English professor and father as an electrical engineer. She moved with her parents to Dallas, Texas shortly after World War II. She graduated from Woodrow Wilson High School in 1952. She then was accepted into Southern Methodist University where she attended college for four years. She was involved in many student associations, PSI Chi, Alpha Kappa Delta, and nominated for homecoming Queen. It was there at a religious retreat that she met the love of her life, Clay Arnold Yeager. She graduated, with honors and a major in Early Childhood and a minor in Psychology, in the spring of 1956. They married on August 7, 1956 at Perkins Chapel on the SMU campus. She then took on the role of being a Methodist ministerâ€™s wife.

She became the proud mother of a bouncing baby boy, Evan Todd Yeager, on April 15 1960. On May 4, 1965, she welcomed a beautiful little girl, Kathleen Marie Yeager. Because of her sonâ€™s learning disabilities, Nadine made it her mission to go back to school and become a diagnostician and special education teacher. She attended North Texas State University and Texas Womanâ€™s University and earned her masterâ€™s degree in Special Education, specializing in Dyslexia. She then taught at Scottish Rite Hospital for Children in Dallas under the guidance of pioneering pediatric neurologist, Dr. Lucius Waites and pioneering language therapist, Dr. Aylett Cox. Her many years of teaching children with disabilities (learning and physical), continued through the mid 1990s. Nadine also became an advocate for the mentally ill volunteering for the NAMI, National Alliance for Mental Illness for many years. She briefly became a Real Estate Agent in Dallas then retired in Commerce Texas in 2001.

She loved her family very much and prayed for all she met.

She was preceded in death by her mother and father, Leslie and Cleo Hamilton. Family survivors include: husband Rev. Clay Yeager of Denison, Texas; brother, Ron Hamilton of Denison Texas; Son, Dr. Evan Yeager and wife, Joleen of Trenton, Texas; Daughter, Kathleen Boatright and husband Paul of Denison, Texas. Nadine has 3 grandchildren: Jessica Ramey and husband Clinton of Sherman, Texas; Victoria Ham and husband Josh of Santee, California; and Nathaniel Yeager of Trenton, Texas. She leaves behind 5 great grandchildren: Ashton Foster, Carter Ramey, Maddisyn Ramey, Audrey Ham and Zachary Ham. There are many cousins, friends and coworkers that will miss her as well.

A memorial service will be held in her honor on Saturday, May 19th at Waples Memorial United Methodist Church, 830 West Main St. Denison, at 2:00 P.M. with Rev. Cheryl Murphy officiating.

Nadine's final resting place will be at Pike Cemetery in Pike, Texas.

To order memorial trees or send flowers to the family in memory of Serita "Nadine" Yeager, please visit our flower store.