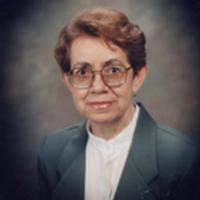 Survivors include her son, Eric MacKinzie of Greenville; and, her granddaughter, Aubry MacKinzie of Keller, Texas.

She was preceded in death by her father, Marcos Regalado.

Funeral mass will be celebrated on Wednesday, January 20, 2016, at 2:00 p.m. at Saint Williams Catholic Church in Greenville.

To order memorial trees or send flowers to the family in memory of Sara Regalado MacKinzie, please visit our flower store.