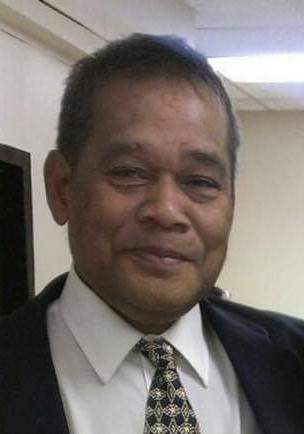 Ruben Deitas, 67, of Oklahoma City, passed away at the OU Medical Health Center in Oklahoma City on Sunday, June 7, 2020.

Ruben was born on April 5, 1953 in Chuuk, Micronesia, Nama Island to Kulster and Lotte Deitas.  He attended Panola Junior College in Texas where he earned his Associates in Applied Science.  While attending college he worked as a tire repair man at M&S truck stop in Carthage, TX.  Ruben went on to attend East Texas State University in Commerce, TX and worked at the university cafeteria where he met his wife Kathryn Deitas.

Ruben and Kathryn welcomed their daughter Alaina in Texas.  They then relocated to Guam where Ruben began working his dream job at the airlines.  While in Guam Ruben and Kathryn welcomed their second daughter, Letticia.  After returning to the United Stated, Ruben welcomed his son, Allen.  He then found his calling as the pastor of Apostolic Church of Micronesia.  Ruben was a leader, starting up multiple churches for the Micronesian communities.

Ruben is remembered by his children, nieces and nephews as a man of destiny with a vision.  He was a brave, strong leader with many purposes.  Ruben was the loving father and person that anybody could trust.  He was selfless, generous and always had open arms to care and support anyone who needed him as their influencer yet he stayed humble and kind.  Ruben was an adventurous soul and never hesitated to travel cross country for his loved ones. Ruben had a contagious smile, a silly side and loved with all his heart.  He was a father to all.

To order memorial trees or send flowers to the family in memory of Ruben Deitas, please visit our flower store.