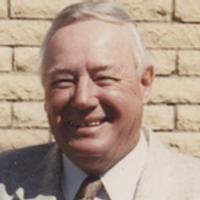 He was raised in Fairlie. He attended Commerce schools where he graduated high school. Then, he joined the United States Navy for four years. He returned home and earned his Bachelor Degree from East Texas State Teachers College. As a member of ROTC, he joined the United States Air Force as a Second Lieutenant. He served honorably, retiring in 1970 as a Lieutenant Colonel.

He served as a military fighter pilot in the Vietnam and the Korean Wars. His plane was lovingly named â€œMr. Bonesâ€ and he flew her with great pride and honor. He flew over 450 successful sorties (missions).

He married Maynell â€œMasieâ€ Roundtree in July, 1947. They had two daughters Mandy and Stacy.

His family followed him all over the world living at various Air Force bases. They returned home to Commerce where they raised their children. He was a member of the Church of Christ in Commerce, Texas, where he taught Sunday school.

After retirement, he enjoyed life by farming and playing golf with his â€˜loved onesâ€™ at Sand Hills Country Club in Campbell. He cherished time with family and friends. He loved to travel. Roy never met a stranger. His laugh was boisterous and contagious. When he smiled there was a special sparkle in his eyes.

He is survived by his sister, Maudine Bishop of Fairlie, Texas; his nephews: Kenny Bishop and wife Susan of Fairlie, Ronnie Bishop and wife Lois of Memphis, TN. He is also survived by many nieces, nephews,great nieces and nephews â€” all whom he loved very much. Royâ€™s constant companion - Scooter, his cocker spaniel - was by his side for ten years. They were a pair to be reckoned with.

He is preceded in death by his parents; his wife; his daughters, Amanda â€˜Mandyâ€™ White Fuller and Stacy Lee White.

The family would like to thank Dr. Rick Selvaggi for his care of Roy, and Lisa Norris, his devoted caregiver.

Funeral services will be conducted Friday, April 22, 2016, at 10:00 A.M. at the Church of Christ in Commerce with David Gibson officiating.

Burial with full Military Honors will follow at Sonora Cemetery in Fairlie.

To order memorial trees or send flowers to the family in memory of Roy Louis White, please visit our flower store.