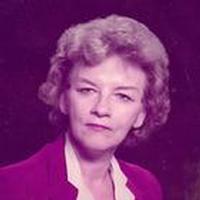 Rosie (Cookie) was born on September 20, 1941,in Barton, Ohio, to Goldie Arlene Boggs Jewell and James Donald Jewell. She was a retired R.N. primarily caring for geriatric patients. Rosie served in the National Guard. "Cookie" loved going to the lake,eating out and going to movies and concerts. Best of all, she loved cooking for her family.

When Rosie was seven years old, she wrote a letter to then President Harry S. Truman. That original letter is currently on display at the Harry S. Truman museum in Missouri. Rosie truly loved her family, her friends and everyone willing to share in a pot of coffee.

She was preceded in death by her parents; her brother, Lawrence Billetter and infant daughters.

A Memorial Service will be conducted on Tuesday, October 7, at 6:30 p.m. at the Church of The Nazarene in Commerce.

A final visitation will be held on Wednesday, October 8, 2014, at 10:00 a.m. at Jones-Walker & Son Funeral Home followed by the procession to the cemetery.

Graveside services will be conducted on Wednesday, October 8, 2014, at 11:00 a.m. at Brigham Cemetery in Campbell.

In lieu of usual remembrances, the family requests that donations be made to the Scottish Rite Foundation, P. O. Box 32508, Waco, TX 76703.

To order memorial trees or send flowers to the family in memory of Rosie Mae "Cookie" Jacobus, please visit our flower store.
Send a Sympathy Card