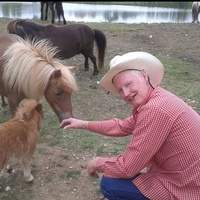 Ronnie was born September 12, 1962, in Paris, Texas, the son of Betty Marie Lane Jones and Harold Gene Jones. He was married to Dianna Lynn Beggs . He was self employed in the trucking industry. Ronnie was a simple, selfless person who would lend a hand to anybody who needed it. He enjoyed arrowhead hunting and riding those back roads listening to his favorite tunes. Although nicknamed "Bud" at a younger age, there were many other names he went by..."Ronnie Gene", "Agitator," "Repo," and "Johnny" and he had many nicknames for family and friends. He was a huge lover of animals and always missed his pet skunk "Prissy". Ronnie had one true love to his wife of 36 years, Lynn. There will never be another one like Ronnie with his contagious laugh and funny stories. He will forever be missed and loved by all of his family and friends.

Those that preceded him in death are his parents and his mother-in-law Frances Beggs.

To order memorial trees or send flowers to the family in memory of Ronnie Gene Jones, please visit our flower store.