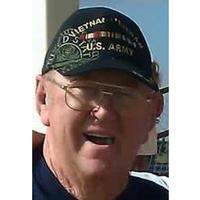 Ronald Dale Pruitt, 75, of Campbell passed away on Saturday, October 8, 2016, in McKinney.

Ronald was born in Aransas Pass, Texas, on December 17, 1940, to Lillie Bell Pool and Sidney Edgar Pruitt. On October 4, 1975, in Reno, Nevada, he married Sandra L. Hughes Pruitt. He was a retired equipment operator for Lowry & Little. Ronald proudly served his country during the Vietnam era serving in both the United States Navy and the United States Army. Ron's favorite pass time was his gun collecting and fishing.

Survivors include his wife, Sandra Pruitt; his children: Sidney (Sylvia) Pruitt of Florida, Debra (Jeff) Wells of California, James (Sonya) Guzman of Texas and Kimberly Guzman (Eddy Cardoway) of California; his 14 grandchildren; his 9 great grandchildren; numerous nieces and nephews; and, his brother, Floyd Pruitt of Colorado.

He was preceded in death by his parents, Lillie and Sydney Pruitt and his brother, Bobby Pruitt.

A memorial service with military honors will be held on Monday, November 21, 2016, at 11:00 a.m. at Rosemound Cemetery, with Jason Cunningham officiating.

To order memorial trees or send flowers to the family in memory of Ronald Dale Pruitt, please visit our flower store.