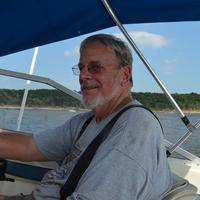 Dick was born in Stamford, CT, on July 22, 1944, to Helen Petersen and Jack Bolt Walker. Dick attended East Texas State University, the University of Minnesota Department of Mortuary Science and Dallas Funeral Institute. He served in the U. S. Army. He was an avid sailor, he loved going to the lake in his boat; and, he enjoyed various cruises and casinos. Dick was also a member of the Commerce Lions Club and the American Legion Post #1 Commerce. Prior to coming to Commerce, Dick learned the funeral business at Rhoton Funeral Home in Carrollton. While in Carrollton he was the owner of Jenson and Walker Landscaping business and served on the City Council for many years.

Survivors include his grandchildren: Marissa E. Walker and Donovan W. Walker (Daisy), great grandchildren: Skylar Walker and Kaison Walker. Other survivors include his cousin (whom he considered a "sister"), Elise "Bunny" Zwart, Douglas Hickson (Yvette); many cousins and family members across the US. His extended family: Daniel, Zach, Marcy Barnett and Keenan and Nakeia Norris, that he considered his grandchildren, W.C. "Bill" Roberts his Attorney and close friend of over 50 years, "Uncle" Earl Reed; and, his Jones-Walker & Son Funeral Home family.

He was preceded in death by his son, Michael E. "Pee Wee" Walker; his parents; and, his nan, Annie Boldt Rivers.

Funeral services will be conducted on Monday, June 26, 2017, at 1:00 p.m. at the First United Methodist Church with Bro. Terry Bryan officiating.

Honorary pallbearers will be Bob Monday and all of Dick's co-workers.

Interment with military honors will follow at Rosemound Cemetery.

To order memorial trees or send flowers to the family in memory of Richard "Dick" Andrew Walker, please visit our flower store.