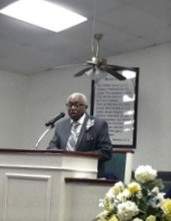 For God so loved the world, that He gave His only begotten Son, that whosoever believeth in Him should not perish, but have everlasting life.   -John 3:16 KJV

Rev. David Moore, 82, of Dallas passed away peacefully at Methodist Hospital in Dallas on Monday night, April 12, 2021.  Rev. David Moore was born October 6, 1938 to the parentage of Simon Moore Sr. and Amanda King Moore in Winona, Texas.  He was the youngest of 8 children.  David grew up in Winona and graduated from Winona High School.  After that he worked for Federal Pacific Electric Company in Dallas, Texas for 25 years and then went on to work at Siemen's USA in Grand Prairie, TX where he worked for another 20 years before retiring.  During this time he also received his Pastoral Studies Degree from the D, Edwin Johnson Institute in Dallas.

David gave his life to Christ at an early age.  He was ordained as a Deacon in 1978 at New Life Missionary Baptist Church in Dallas, TX.  He received his calling to the ministry in 1979 and was ordained as a minister in 1980.  He then served as an associate minister at New Life.  In 1983 he was called to pastor at St. James Baptist church which was then located in Dial, TX.  Under Pastor Moore's leadership, the church decided to move to Honey Grove in 1998.  In September 2000 the church was able to enter into its new sanctuary.  Also under Pastor Moore's leadership, the church was able to pay off the sanctuary in 2013.  He shepherded and served the patronage there faithfully for 35 years until his health declined in 2018.

On April 12, 2021, Pastor Moore was surrounded by family as he found perfect peace in the arms of our Lord and Savior.  He was preceded in death by his parents Simon Sr. and Amanda Moore; siblings, Simon Moore Jr., Woodrow Moore, Mattie Beatty and Mary Lindsey; 2 grandchildren and 1 great grandchild.

To order memorial trees or send flowers to the family in memory of Rev. David Moore, please visit our flower store.