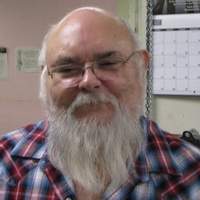 Raymond Yoakam, 64, of Commerce passed away at Presbyterian Hospital of Dallas on February 10, 2019. Raymond was known as "Spunk" to his family. He was an avid model railroader and outdoor sportsman.

Raymond is survived by his brother, Charles Yoakam and wife Linda of Elkhart, Indiana, his niece, Kathy Yoakam Mangona and husband Rick, of Goshen, Indiana, as well as a great nephew Nicholas and a great niece Sophia.

He was preceded in death by his parents, Katherine Marie Zimpfer Yoakam and Russell Raymond Yoakam.

Services will be held at a later date in Lima Ohio, where Raymond will be laid to rest with his parents.

To order memorial trees or send flowers to the family in memory of Raymond Albert Yoakam, please visit our flower store.