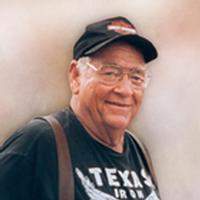 Raymond helped organize the Cumby Volunteer Fire Department; served on the school board at Cumby ISD; and, he served on the Cumby Telephone Board. He had been a market manager at Piggly Wiggly in Commerce; owned and operated Raymond Pierce Auto Salvage Yard in Cumby for many years; and, he owned and operated the Cumby Auction. Raymond was an avid bike rider; he loved riding to rallies on his Harley-Davidson.

He was preceded in death by his parents; his sisters: Dorothy Hall, Sybol Stevens, Peggy Millsap and Alaska Nance.

In lieu of usual remembrances, the family is requesting that donations be made to the Cumby Cemetery Association, P.O. Box 734 Cumby TX. 75433 or Texas Kidney Foundation, 5429 LBJ Freeway. Suite 250. Dallas, TX 75240.

To order memorial trees or send flowers to the family in memory of Raymond Delane Pierce, please visit our flower store.