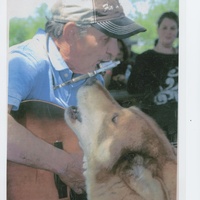 Floyd Randolph "Randy" Wallace, 64, of Commerce passed away in the comfort of his own home on Tuesday, September 25, 2018.

Randy was born on July 16, 1954, in Dallas, Texas, the son of Robert Earl Wallace and Dorothy Fern Robbins Wallace. He was a hard working man that did carpentry, roofing, painting and contractor work throughout his life.

Randy was also an accomplished musician and with the help of his partner "Clyde" the singing dog, brought joy to many folks across the land. He was a God-fearing man that had many pivotal rolls in his life. He gave many Bible studies which were instrumental in changing many people's lives.

He was preceded in death by his father, Robert Earl Wallace, nephews, Justin Pollock and Benjamin Wallace and a niece, Kristen Hilbun.

Burial will follow at Seymore Cemetery in the Seymore Community in Hopkins County.