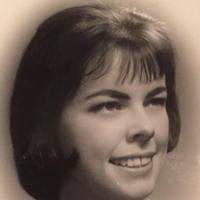 Paula Grace Hudson, age 74, passed away on February 11, 2017. She was born on February 16, 1942, in Paris, Texas to Paul Otto George and Velma Grace Adams. She was of the Baptist faith and a member of Mt. Zion Baptist Church.

As their only surviving child, Paulaâ€™s childhood was filled with exploring nature and nurturing others. Whether she was helping an elderly relative, sewing and gardening with her mother, or tagging along with her fatherâ€™s Boy Scout troop, Paula found wonder and joy in her earthly world. As she grew up, her parents made sure that she could manage a tractor and prepare a savory meal. Her love of collecting cookbooks began at this early time in her life and continued until her departure. As a mother, she instilled qualities of knowing the names of flowers, trees, birds and butterflies, as well as the appreciation of an interesting recipe. Her lifelong love of reading was a constant force as she always had a novel, biography or inspirational book within reach. This dedication to learning has been one of many lasting gifts that she encouraged in her children.

Paula graduated from Commerce High School in 1959 and immediately enrolled in what was then East Texas State University where she was a member of Alpha Delta Pi. She majored in Home Economics and Secondary Education and graduated from college when she was barely twenty years old. Paula continued on to complete her Masters of Education, and she later received another degree in English. Paulaâ€™s teaching career began in 1963 in Dallas. She later taught at Celeste High School, but took a break to rear her seven children. In 1985, Paula reentered the teaching profession at Commerce ISD as a reading teacher, and she finished her career as she began it, teaching Home Economics at her beloved Campbell ISD. She retired in 2015 having touched countless lives.

On February 6, 1965, Paula married the love of her life James Guy Hudson in Durant, Oklahoma, and they settled in Commerce. Their union of fifty-two joyful years served as a model of how marriage should endure. Together they brought seven children into this world who will continue her legacy of love and grace. Her happiest times were when she was surrounded by her children and grandchildren. She knew that if she threw together one of her scrumptious meals, there would always be a cheerful crowd to enjoy it. Paula and Jim took parenting as their most important contribution to their children and grandchildren. Spending time together in Godâ€™s glory and helping others are attributes that her children owe back to her. If you were ever a student in Paulaâ€™s classes, you knew that you were one of her children too. Love had no boundaries with Paula.

She was preceded in death by her parents and infant sister Mary Ann George.

Paulaâ€™s family will receive friends and loved ones on Tuesday, February 14, 2017, from 5-8:00 pm at Jones-Walker Funeral Home in Commerce, Texas. The celebration of Paulaâ€™s life will be Wednesday, February 15, 2017, at 1:00 pm at the First Baptist Church in Commerce. A graveside service will follow at Rosemound Cemetery.

To order memorial trees or send flowers to the family in memory of Paula Grace Hudson, please visit our flower store.