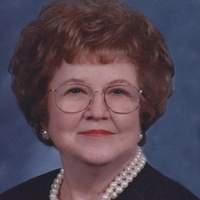 Mrs. Rex was born July 19, 1935 in Commerce, the daughter of Malcolm M. Daniel and Lavelle Threlkeld Daniel.
She was married to Glendon Dale Rex for nearly 60 years until he preceded her in death on April 9, 2012.

Patsy was all about "family first" and loved cooking and shopping as well. The family attest to the fact that her specialty was in the field of desserts and that they enjoyed partaking of them at all the family gatherings that she hosted throughout the years. Her favorite shopping spot was at any Belk Department Store.
She was an active member of the First Baptist Church of Commerce as long as her health allowed her to attend.

Those that preceded her in death are her parents, her husband Dale, and a son Jimmy Rex.

Funeral Services for Mrs. Rex will be held at 2:00 p.m., Thursday, November 29, 2018, at the Jones-Walker and Son Funeral Home Chapel. Reverend Kris Meyers, Pastor of First Baptist Commerce will officiate.

Visitation will occur one hour prior to the service at 1:00 p.m.

To order memorial trees or send flowers to the family in memory of Patsy A. Rex, please visit our flower store.