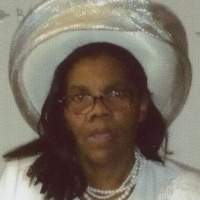 Ora Lee Harrison-Rhodes, born July 23, 1953 to the parentage of Manuel and Vera Harrison in Linden, Texas, both proceded her in death. She received her education from Community High School, Nevada, Texas. As a young woman she loved the Cowboys, joking and fishing, even though she managed to hook herself in the eye. The Dallas Cowboys were Her team....no matter what. She loved the Cowboys. She was the great cook of the family and Thanksgiving was her favorite holiday, but no one could eat until 2:00 pm, when she walked through the door. She was known for her cornbread dressing and caramel cake. After moving to Commerce, Texas she married the love of her life. A solider boy from Nevada, Texas, Johnny Rhodes and they lived happily until God called him home.

Ora confessed Christ at an early age under the pastoral leadership of the late Rev. J.H. Linson; Palestine Baptist Church, Lavon, Texas. She later united with the Truevine Baptist Church under the pastoral leadership of the late Rev. Larry Price; (current pastor Rev. Clay Price). When her health began to fail, she united with Out Of This World Ministries,under the leadership of Apostle R. Britton with her children where she was the mother of the church. After praising and worshiping God, she and the Apostle Britton would have their Sunday Cowboy discussion.

Ora loved her family, especially her children and grandchildren, they were her life line. There was nothing too good for them. She was a great mother and a great example of a God-fearing woman. She loved each of them unconditionally. They were her greatest joy and laughter. She was a lover of God and life, she lived life to its fullest. She laughed at their pain while making her own medicine to heal their hurts. Her laugher was contagious. Her favorite scripture was Psalm 91. The Lord was her refuge and her strength. She read this scripture every morning before starting her day and every night before going to bed. When she could no longer read it for herself, her daughters would read it to her while she quoted it. Ora praised and worshipped God even on her sick bed. On August 15th on her sick bed her daughter recorded her preaching and praising God. We called her Evangelist Rhodes.

Funeral services for Momma Ora Lee will be held Saturday, August 31, at 11:00 a.m. at the First United Methodist Church of Commerce. Rev. Bill Pannell will officiate, Apostle R. Britton will deliver the Eulogy.

To order memorial trees or send flowers to the family in memory of Ora Lee Rhodes, please visit our flower store.