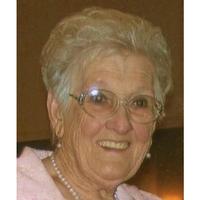 She attended school at West Delta and at Commerce East Texas State Teachers College. She graduated in 1969 from Trenton State in New Jersey with a Bachelor of Science degree in Accounting and Business. She worked many years in banks in Texas, Florida and New Jersey.

After her husband retired from the military, they moved to North Carolina where she became vice-president of an accounting firm for 16 years. After 17 years of residing in North Carolina, they moved back to Texas to be closer to her family.

Survivors include her two sons: Mark A. Crouch and his wife Treesa of Campbell and LaDayne Crouch of Commerce; her two granddaughters: Christy Guest of Commerce and Amber Crouch of Raleigh N.C.; her grandson, Richard Crouch who serves in the United States Marine Corps; and, her two great-grandchildren: Chris Gutierrez-Clark and Cody Clark.

She was preceded in death by her husband, James; her parents, Ollie and Gertrude Thompson; her three brothers: Johnny, Billy Don (B.D.) and Robert Thompson; and, her two sisters: Lillie Mae Sears and Jean George.

Graveside services will be held on Wednesday, December 30, 2015, at 1:00 p.m. at Oaklawn Cemetery in Cooper, with Pastor Kalob Wright and Pastor Samuel Glenn officiating.

To order memorial trees or send flowers to the family in memory of Ollie Ruth Ennis, please visit our flower store.