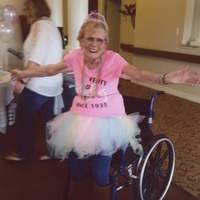 â€œBlessed are the pure in heart: for they shall see God.â€ Matt. 5:8

Nelma Jo Holley Dodd, 82, passed from this life and gained her heavenly home on Saturday, January 6, 2018, in Tyler, Texas. She was a beloved daughter, wife, mother, grandmother, and great-grandmother. She was born in Commerce, Texas, to W.E. â€œBoâ€ Holley and Emma D. Thomas Holley on July 28, 1935. She lived her life in and around the Commerce area. On August 1, 1951, she married Tommie Gaston â€œTuffyâ€ Dodd. Together they raised three children: one son and twin daughters. They were married 62 years.

After being out of high school sixteen years, she decided to go to college at East Texas State University where she earned her bachelorâ€™s degree in Vocational Home Economics in 1970 and a masterâ€™s degree in Education in 1971. She then began her teaching career in Cooper where she taught Head Start. She then went on to teach Home Economics in Quinlan; served as the Home Economics Occupation Education Specialist for four years working with superintendents, principals and teachers in 21 counties in East Texas; served as superintendent in the Cumby ISD; kindergarten principal in Quinlan, Assistant Principal for D.C. Cannon Elementary and an English teacher at Quinlan Middle School; taught Home Economics at A.C. New Middle school in Mesquite; high school principal in the Campbell ISD; taught Home Economics at Bland ISD. While at Bland she was advisor to the Family, Career and Community Leaders student organization where she had three Region III FCCLA officers and one state Officer. She also served as yearbook sponsor. During her career she was named a member of Future Homemakers of America, Texas Association, Hall of Fame; received Administrator of the Year Award, Region 10; Master Teacher Award for the FCSTAT organization, Region III; FCS teacher of the Year; FCCLA Spirit of Achieving Award; Teacher Mentor Award. She was a member of several professional organizations, and was a Deaconess at New Life Congregational Methodist Church of Commerce.

Funeral Service will be held on Tuesday, January 9, 2018, at 1:00 P.M. in the Jones-Walker & Son Funeral Chapel with Bro. Terry Holley officiating.

Interment will follow in the Shiloh Cemetery in Klondike.

To order memorial trees or send flowers to the family in memory of Nelma Jo Dodd, please visit our flower store.