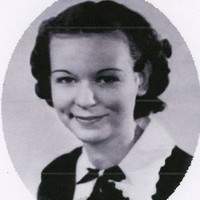 Mary Frances Van Norman, 98, formerly of Cumby, TX, passed away peacefully in the early hours of Saturday, September 7, 2019 in Commerce.

She was born on October 3, 1920, in Cleburne, Texas, the daughter of William Brown Kelly and Harriet Elizabeth Killion Kelly. Both parents were of Irish Protestant descent (she was proud of being Irish). Another thing that made her proud was being a native Texan, believing there was no place like Texas! She grew up around Abilene, Vernon, and Mineral Wells, always residing in a big house. Mary's earliest memory was of being in a white wicker baby buggy, hence a life long love affair with white wicker. Her childhood activities included: swimming, roller skating, tennis, "expression" piano, participating in school plays and giving classical solo piano recitals throughout her adolescent and teen years. Upon receiving her license, she thoroughly loved driving and her father gave her the use of a 1934 Pontiac which was christened the "Kelly Kab". It quickly became "the vehicle" to be seen in around her hometown. She was an honor student and member of the Pep Squad Drill Team in high school, and went to several State competitions, winning several medals and certificates in Essay Writing.

In 1938 she met and eventually married Lyle Van Norman from Nebraska. She considered him quite handsome, charming, and a great dancer. They sort of danced their way through life until his passing in 1984. She crocheted extensively while her children were young, and also kept books for her husband's retail grocery business while living in New Mexico. Upon returning to Dallas, she assisted in her sister's upscale gift shop in Highland Park Shopping Center. After her children were grown, she returned to school for CEUs at El Centro College in Dallas to brush up on her accounting skills and was employed as Executive Secretary to company president, Harry Thaten at Greenbelt Enterprises (a commercial real estate development and construction company).

Mary loved wearing hats and jewelry and had lots of both. She also was a member of the Red Hat Club. She loved anything from Nieman's , was an archetypical Libra and wouldn't be caught without her Chanel #5 perfume. She also collected Willow Ware (to compliment her white wicker). She was also active for many years in the United Methodist Women's Organization. She did her duty to uphold the social standards of her society, but thought that life should be fun and that women should not have to work hard. This active lifestyle continued well into her 90's by her finding somewhere to go and something to do almost everyday!

Funeral Services for Mary Frances Van Norman will be held Saturday September 14, 2019 at 2:00 p.m. in the Cumby Methodist Church of Cumby, Texas. Visitation will occur one hour prior to the service at 1:00 p.m.

Rev. Duncan Graham will officiate and Chaplain Samuel Glenn will assist with the services.

Interment will be at the Mt. Zion Cemetery on Highway 11 east of Commerce.

To order memorial trees or send flowers to the family in memory of Mary Frances Van Norman, please visit our flower store.