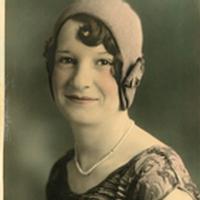 Lovena "Pete" Barker Robinson, 101, died on Sunday, January 24, 2016 in Corpus Christi, Texas. Pete was born on January 12, 1915, in Commerce to William Penman and Ruth Neill Barker. She was preceded in death by her parents and sisters, Jessie Barker Southall and Betty Barker Robertson, brother Jack Barker, and several nieces and nephews.

After graduating from Commerce High School in 1933, Pete began her 72 year career as a beautician. She owned a shop on Campbell Street for over 60 years. From the age of 16 she belonged to the First United Methodist Church, where she was a member of the Dough Rollins Sunday School class, served on several church committees and taught the Nursery Sunday School class for almost 20 years.

Pete married her high school sweetheart, George Robinson, on October 4, 1935 in Paris, Texas. They were married 73 years until his death in 2008.

Survivors include her only child, daughter Betsy Robinson Chapman. of Corpus Christi, grandsons, Dr. Bill and Deanna Chapman of Jarrell, Bob and Sarah Chapman of Corpus Christi, and great grandchildren, Brannon, Claire and Kyle. Also surviving are nieces Kay and Jerry Hall of Klein, Harriet and Wyman Williams of Commerce, Jacque and Glenn Shackelford of Whitehouse, Sharon and Joe Hall of Arlington, Mary Barker of Tyler and nephew Steve and Faye Moore of Emory. Several grand and great nieces and nephews also survive.

The family would like to thank Dr. Rick Selvaggi for his many years of care, as well as the staff of Country Home Estates and First Choice Home Health for their excellent care of Pete for the last four years.

To order memorial trees or send flowers to the family in memory of Lovena "Pete" Robinson, please visit our flower store.