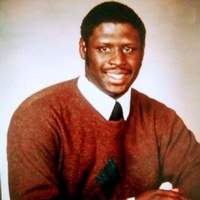 Kerwin was born to the parents of Robert E. Hayes and Mary C. Hayes, at age two he began to be raised by Billy J.
Reeves and Mary C. Reeves. He accepted Christ as a young child and was on fire for the Lord; he attended Chapel Hill
Missionary Baptist Church until he left Dallas, and moved to Honey Grove, TX. He was the Choir president, and over
the youth Usher Board while attending Chapel Hill, not to mention all the plays, concerts, delegations he participated in.
Kerwin was an active member of Christian Chapel CME until he parted this life where he served on the Usher Board,
and Adult Choir.

He attended school in Dallas Independent School District and graduated from David W. Carter High class of 1982.
Kerwin was always certain of the type of life he wanted to live, and did just that. He met and married Beverly Ann
Daniels on February 17, 1984 after a short courtship. He fell in love and knew from the start she was the one for him, he
was excited about his Bev for the next 35 years. During their union two beautiful children were born Lavonda S. Hayes;
and Kerwin C. Hayes Jr. Kerwin was a proud and dedicated husband and father to his family. He led with Godâ€™s love in
his heart and on his side. Later in life he embraced becoming a grandfather to five granddaughters: Zaâ€™tayvia; Malliyah;
Renesme; Asa; and Aura which was his pride and joy. You could feel the excitement through the phone when they were
with him. His heart could barely hold the joy of being a grandfather, and spending time with his baby girls.

Kerwin was everything that a Great Man should be, he lead by example, and lived his life for God. No matter what
trials came his way he always stood and said GOD GOT ME! Which was true God had him from birth until his very last
breath. Kerwin literally praised his way into Heavenâ€™s Gates, in his final hours all he wanted was to listen to Godâ€™s
words through music, pray and hold the hands of his love ones. Kerwin you did it your way always which was the best
way for you, no one else would ever thought to praise they way through the pain but you did. You held on to Godâ€™s
unchanging hand and allowed him to slowly take you away, as the Angels came I could hear you say Iâ€™m HERE do you
see me, I made it, oh Thank God I made it.

I have fought the good fight, I have finished the race, I have kept the faith. 8 Henceforth there is laid up for me the crown of
righteousness, which the Lord, the righteous judge, will award to me on that day, and not only to me but also to all who
have loved his appearing.

Services will be Saturday, March 16, 2019 at 12:30 P.M. at Christian Chapel C.M.E. in Honey Grove with Rev Shawn Brunson officiating. Burial will follow at Cedar Hill Cemetery in Honey Grove.

To order memorial trees or send flowers to the family in memory of Kerwin Charlton Hayes, please visit our flower store.