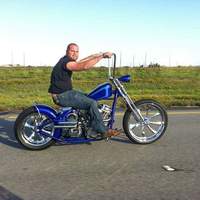 Justin Martin Linex, 32, of Greenville, formerly of Wolfe City, passed away early Saturday morning, October 19, 2019, from injuries sustained in a motorcycle accident. He was born on February 28, 1987, in Dallas, Texas, the son of Martin Edward Linex and Michele Neel Linex.

Justin passed from this life doing what he loved, riding his motorcycle. He opened his first motorcycle shop, Justin's Cycle, at the young age of 16. He was the owner of Pro Storage and the recently reopened Hunt County Chopper in Greenville, Texas. Justin will always be remembered as the life of every event he attended. His caring, fun, passionate personality made him so easy to love by all who knew him.

He is survived by his parents, Martin and Michele Linex of Greenville, a son, Mason Linex, a daughter, Megan Linex, the mother of his children, Jessica Linex of Wolfe City, his sister, Jennifer Bowen and her husband, Chris of Greenville, and niece, Morgan Bowen also of Greenville. Justin is also survived by his grandparents: Jean and Howard Neel of Wolfe City and Frances Linex of Richardson and his significant other, Shana Wells of Royse City. Other survivors include a host of Aunts, Uncles, Cousins, extended family and lots of amazing friends.

Funeral service will be Thursday, October 24, 2019 at 2:00 P.M. at First Baptist Church in Wolfe City, with Brother Terry Bryan officiating.

Anyone wishing to take part in one more ride with Justin, please be at Jones-Walker and Son Funeral Home at 1209 Live Oak in Commerce at noon on Thursday, October 24, 2019. Kickstands up at 12:30 to head to First Baptist Church in Wolfe City for his funeral service.

To order memorial trees or send flowers to the family in memory of Justin Martin Linex, please visit our flower store.