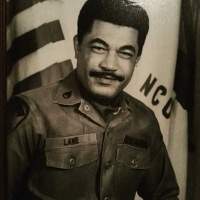 Joseph Ray Lane, 77, of Cumby, passed away peacefully at his residence on Thursday morning, August 22, 2019.

Joseph Ray Lane, a Vietnam War Veteran, was born on April 21, 1942 to Fawn and Lola Lane. He went to be with
his Heavenly Father on August 22, 2019 after an all too short, but courageous fight against pancreatic cancer. He was
born in Ben Franklin, Texas; but spent most of his life living in Oklahoma and Texas. He joined the Army and served for
22 years retiring as an E-6 Staff Sergeant. Joe is a veteran of the Vietnam War, where he earned the Purple Heart, the
National Defense Service Medal, The Vietnam Service Medal with Five Service Stars and numerous other medals and
awards. He retired from the Army and started a career with the United States Postal Service while opening up his own
business. After retiring from the Postal Service and closing his businesses; Joe moved back home to Texas and returned
to his roots spending his last days as a farmer.

He is survived by his two sons: Lon K. Lane and Julius R. Lane and wife Talia; He is also survived by one brother, F. L. Lane and wife Roselyn; one sister: Jimmie Kyle; wife Charlotte Lane and her children Bridget Finch, Amber Bowman and her grandchildren Alexia Ford, Jaquess Finch, Takerriya Thomas, Aliecia Ford, Breonah Ford, Nicholas Ford, Samuel Bowman; her great grandchildren Xzavier Goodson and Samari Thomas; loving nieces and nephews and great-nieces and nephews along with many other family members and friends.

The family wishes to thank the nurses and health care workers from Caring Heart Hospice.

Joseph was preceded in death by his parents: Fawn and Lola Lane; his brothers and sister: Allen Lane, Eloise Lane-
Moton, and Lawrence Lane.

The funeral service will be held on Thursday, August 29, 2019 at 2:30 pm at Jones-Walker & Son Funeral Home in
Commerce, Texas. Pastor Deborah Sharper will officiate. Interment will be on Friday, August 30, 2019 at 11:30 am at the Dallas-Fort Worth National Cemetery.

In lieu of flowers, donations may be made to the American Cancer Society in memory of Joseph Ray Lane.

To order memorial trees or send flowers to the family in memory of Joseph Ray Lane, please visit our flower store.