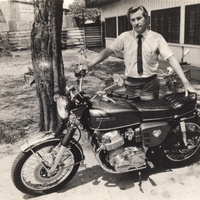 Johnny Lynn Millsap age 69, of Campbell, Texas died on Thursday, August 10, 2017 at Sulphur Springs Health and Rehab. He was born on December 12, 1947 in Dallas, Texas to Jerald Deene and Ruby Louis Sanders Millsap.

Johnny was a Master Carpenter and Welder for many years. He served in the United States Marine Corps during Vietnam War at the US Embassy. He later worked with the State Department teaching English to Laotian Soldiers. In his leisure time Johnny enjoyed reading, riding motorcycles and working on cars.

He is survived by his brother Larry Dean Millsap and wife Sylvia of Cumby, niece Pauline Aguilar and husband Tony, nephew Keith Allen Millsap, and a large extended family.

He is preceded in death by his parents and brother Monty Derle Millsap.

Graveside services will be held on Thursday, August 17, 2017 at 1:00 P.M. at the Dallas Ft. Worth National Cemetery. Military honors will be presented by the United States Marine Corps.

To order memorial trees or send flowers to the family in memory of Johnny Lynn Millsap, please visit our flower store.