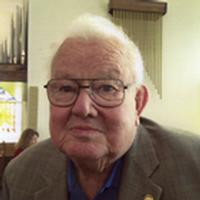 Joe Fred was born in Commerce on July 3, 1931, at Dr. Allen's hospital. His parents were Fred Cox and Lucille Callan Cox. He married married Jane Dickson on his 28th birthday; they were married for 56 years. He went to Fairlie Elementary and Commerce High School, graduating in 1947. He attended East Texas State Teachers College for his BA; East Texas State University for his MA; and post graduate work at Texas Christian University. He taught history from 1967 until 1999 at East Texas State University, now Texas A&M University Commerce, where he was always a favorite of the students. In 2000, he was awarded the Texas A&M University Commerce President's Spirit of Mayo Citation.

He was a member of the First Presbyterian Church in Commerce all of his life. He taught a Sunday school class for many years at the church. He was a farmer for many years, and served on the State Committee to Eradicate Screw worms. He also served on the Cooper Dam Board, the Commerce City Council and Commerce School Board.

He loved to read history as a hobby, especially Texas history, and was always up for a discussion of the subject with anyone. He was a 50-year member of the Masonic Lodge #439.

Survivors include his wife, Jane Cox, his daughter, Karen Jo Cox of Austin Texas and his son-in-law, Steve Bohl, and, his two grandsons; Andrew Nathan Bohl and Aaron Michael Bohl, Joe Fred is also survived by his two cousins; Ann Patrick of Fort Worth and Carolyn Burt of Commerce.

He was preceded in death by his parents Fred and Lucille Cox.

Visitation will be held beginning at 11:00 a.m. until service time on Saturday, December 26, 2015, at the First Presbyterian Church of Commerce.

Funeral services will be held on Saturday, December 26, 2015, at 1:00 p.m. at the First Presbyterian Church in Commerce with Rev. Krista Rasco officiating.

Committal with Commerce Masonic Lodge #439 will follow at Rosemound Cemetery in Commerce.

In lieu of usual remembrances, contributions should be made to the Joe Fred and Jane Cox Scholarship Fund at Texas A&M University - Commerce, 3112 State Highway 24, Commerce, TX 75428 or the First Presbyterian Church, 1216 Monroe Street, Commerce, TX 75428.

To order memorial trees or send flowers to the family in memory of Joe Fred Cox, please visit our flower store.