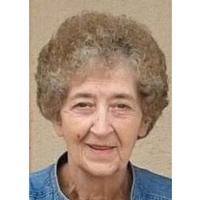 Jeanie is survived by a daughter, Jaci Garner and husband Bill of Dodd City; a son, Monte Johnson of Burleson; a brother, Billy Carl Pittman and wife Vivian of San Antonio and a sister Judy Burlin of Clarendon.

She is preceded in death by her husband, Roy "Cowboy" Johnson, her parents Carl and Roberta Pittman, a sister Patricia Jordan and a brother Keith Pittman.

Jeanie graduated from Clarendon High School in 1954. She married Roy "Cowboy" Johnson on August 15, 1954 in Amarillo, Texas and was blessed to be married for 61 years. She spent most of her time as a homemaker and later became a book keeper in Dimitt, Texas. Jeanie was a member of Beta Sigma Phi and Lady Bug Bridge Club. She was active in various school activities, a Camp Fire leader, Boy Scout leader, and a sponsor for 4-H Horse Clubs. Jeanie was a Christian woman that was dedicated to God, family and her friends. She was a member of the First Christian Church where she had served as a song leader and a Sunday School teacher.

The family wishes to extend our sincere thanks for all your prayers during our loss.

To order memorial trees or send flowers to the family in memory of Jeanie P. Johnson, please visit our flower store.