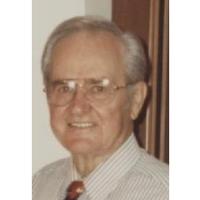 J D (Mac) McGuyer, of Commerce, Texas, joined his family in Christ on 30 May, 2016. J D was born on 11 February 1918 in Charleston, Texas, to Benjamin and Florence McGuyer. He grew up on the family farm in Charleston and attended school there through the eighth grade. He attended Cooper High School and earned his high school diploma in 1937. He then attended barber school and started his barber career in Jacksonville, Texas. In May, 1941, he was drafted into the U. S. Army prior to the start of WWII, and completed his basic training at Fort Leonard Wood. He was boarding a naval ship in San Francisco with the intention of being shipped to the Philippines when Pearl Harbor was attacked on 7 December 1941. His Army battalion was redirected, and he was on one of the first ships from the mainland to arrive at Pearl Harbor. He spent the next year and a half helping to rebuild Pearl Harbor, and served as an Army barber after duty hours each night. When the Pacific offensive began, he and his Company â€œAâ€ 47th Engineer Construction battalion were attached to a Marine unit as they began island â€œhoppingâ€ across the Pacific Ocean. He always considered himself very lucky to have survived the battles that ensued on Kwajalein, Eniwetok and Saipan. He was finally on Okinawa when WWII was ended. Military decorations and citations included â€œThe Army Meritorious Unit Award, American Defense Service Metal, Asiatic-Pacific Campaign Medal with 3 Bronze Stars, Good Conduct Medal, 1 Service Stripe and 7 Overseas Service Barsâ€. He was honorably discharged and returned to Texas after WWII ended.

On 6 November 1945; he married Dorothy Hendley in Oak Cliff, Texas. He worked as a barber in Oak Cliff, Texas. To help with the illness of a relative, they moved to Canyon, Texas for a year, and returned to the Paris, Texas and Dallas area afterward. In 1954, they moved to Commerce, Texas where he soon became the owner of the West Side Barber Shop in downtown Commerce. He worked there until his retirement in 1997 at age 79. During those years at the West Side Barber Shop, the barber chairs became a far-reaching source of local and national information, dubious tales of fishing excursions and the â€œoccasionalâ€ telling of jokes of all kinds. It was during this time that he became known in Commerce as simply â€œMacâ€. He was an avid fan and supporter of local athletics and music programs, but more importantly, he was a follower of Christ at the First United Methodist Church in Commerce. He helped to raise three sons in Commerce, and later treasured the company of numerous grandchildren and great-grandchildren. On the day of his retirement on 18 December 1997, the mayor of Commerce declared it to be â€œMacâ€ McGuyer Day, and he was â€œgiven the keys to the cityâ€ for the day. Early in his retirement, he enjoyed traveling throughout the United States. Later in his retirement, he enjoyed the company of numerous local friends at breakfast meetings in town, and especially enjoyed the overwhelming support and friendship of Bob and Norma Monday of Commerce.

Mac was a lifelong conservative and lived his life demonstrating traditional common-sense principles.

Interment with military honors will be held at Rosemound Cemetery following the service.

To order memorial trees or send flowers to the family in memory of JD McGuyer, please visit our flower store.