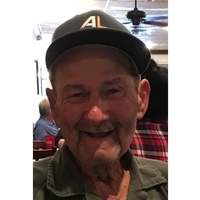 James Randolph (Jim) Blackwood Jr. was born June 28, 1930 to parents James Randolph Blackwood and Laura Belle Burkett. Jim passed away at the age of 87 on Wednesday, October 18, 2017 at the VA community living center in Bonham.

Jim was born and raised in Honey Grove, Texas. He had 4 brothers and 2 sisters. He was the last surviving sibling from this generation.

Jim proudly served his country in the US Army during the Korean War. He served half of his time in Korea and the other half in the United States. He was injured during the war after being shot in the ankle. After his time in the military, he began a career as a surveyor. He traveled all over the world on surveying contracts. He spent time in approximately 15 foreign countries. He talked the most though about his time in Alaska.

After his retirement, Jim became a â€œjunk manâ€. He could always find the perfect treasure at a bargain price. He enjoyed living a simple life with few material possessions. He traveled to different flea markets and made friends at each place. In 2007, he returned to Honey Grove. He set up a junk shop and started his business while living in his van. He found a few old friends from his younger years and enjoyed catching up. He quickly made new friends and was happy to be home. Jim continued to work the flea markets and sell wire until his health began declining a year ago.

Jim is survived by Mark and Kathy Johnson, who made him a part of their family 10 years ago and loved him like a dad. They were by his side when he passed away. He is also survived by his 4 biological children, 2 nephews and several close friends.

A memorial service will be held for Jim on Saturday, October 21, 2017 at 2:00 pm at Westside Baptist Church in Honey Grove with Terry Paul Cunningham officiating. Cremation arrangements are being provided by Jones-Walker and Son Funeral Home in Commerce.

To order memorial trees or send flowers to the family in memory of James Randolph Blackwood Jr., please visit our flower store.