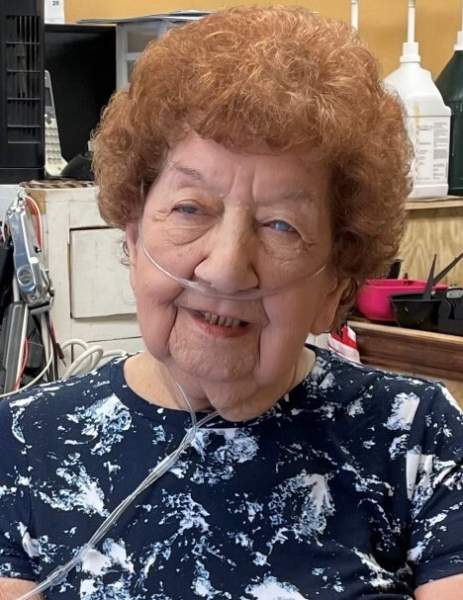 Gloria Hendrix, 97, of Mesquite (formerly of Commerce), passed away on August 18, 2021, at the Baylor, Scott and White Medical Center in Sunnyvale. She was born in Boston, Massachusetts on June 19, 1924, the daughter of Giacomo Ristuccia and Rosaria Della Chiesa Ristuccia. Ms. Hendrix worked in Customer Service for GTE for many years, working in both the Commerce and Athens offices until her retirement. "Glo" was one of those people that never met a stranger and loved to talk, (and catch up on all the gossip). She was a very independent individual who lived on her on until the age of 94; the last 16 of those years was after blindness occurred. She will best be remembered for her cooking and sewing skills and for being a typical "Granny"; you couldn't pay her a visit without being fed. Gloria was also considered an avid Texas Ranger fan, and could "dosey doe" with the best of them on the square dance floor.

She is survived by her daughter: Lori Parolini and husband Arthur of Mesquite, son: John Shannon and wife Rhonda of Commerce, grandchildren: Melea Martinez of Sacramento, Ca., Tiffany Quevedo of Rockwall, Eric Shannon of Commerce, Brittany Smith of Honey Grove, Alisha Croft of New Orleans, La., Tyler Driggers of Plano, and Dylan Ferguson of Mesquite.  Other survivors include her great grandchildren: Tatum and Cade Perdue of Rockwall, Bruce and Rex Martinez of Sacramento, Ca., Averi Shannon of Commerce, Vince Quevedo of Rockwall, Gavin and Kasen Smith of Honey Grove, baby girl Dyer (due in December of 2021) of New Orleans, La., Dylan Sparger of Commerce, numerous nieces and nephews and a hosts of friends.

She was preceded in death by her parents, husband, A.J. Shannon, sons: Ronald Bartlett and Jeffrey Shannon and sisters: Julia Crescitelli and Joan Short.

A graveside service for Ms. Hendrix will be held on Wednesday August 25, 2021 at Rosemound Cemetery with Bro. Terry Bryan officiating.

In lieu of flowers, the family request that donations be made  in memory of Jeffrey Shannon; c/o CHS Memorial Fund, 3315 Washington Street Commerce, Texas 75428.

Mask are strongly recommended if you are attending the service.

To order memorial trees or send flowers to the family in memory of Gloria "Glo" Hendrix, please visit our flower store.