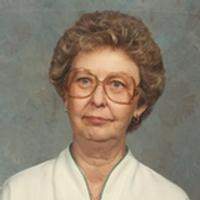 Frances Jean Ward was born in Commerce, Texas, on November 17, 1924, to Mildred Jeanette Martin Knight and Sam Knight. Jean worked as a secretary at A.L. Day Elementary School in the early 1960's and later as co-owner of Ward's Pharmacy in Commerce, until her retirement in the 1990's. She was married to Glenn Max Ward, who preceded her in death.

Survivors include her daughters: Merle Ward and her partner Laurie Bednarski of Puyallup, Washington and Audrey Moffett and son-in-law William Moffett of Carrollton, Texas, her sister-in-law, Dorothy Ward of Commerce and her sister-in-law Jean Ward of Houston, Texas.

She was preceded in death by her husband, Glenn, her parents, Mildred and Sam Knight and her son Glenn Martin Ward.

To order memorial trees or send flowers to the family in memory of Frances Jean Ward, please visit our flower store.