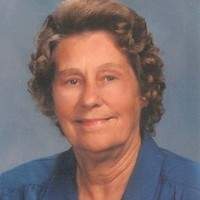 Euple Blackburn Walkerâ€™s life journey came to a peaceful close on Wednesday September 25, 2019 when, surrounded by family, she passed away at Oak Manor Nursing Home within weeks of her 101st birthday. From the many whose lives she touched with only her welcoming smile and friendly greeting to those of us whose lives she shaped with her deep love and wise counsel - she will be missed. A service of thanksgiving will be held Monday September 30, 2019 at 10:30 AM in the sanctuary of the First United Methodist Church of Commerce. The family will greet friends in the church foyer beginning at 9:30 AM.

When Flora Euple Blackburn was born in Mantachie, Mississippi on Friday November 29, 1918 the war to end all wars - World War I â€“ had been over for only 18 days. Floor length dresses, oil lamps, and horse drawn wagons were the norm as Koger and Zera Moore Blackburn welcomed their eldest child into the world. They named her Flora for her paternal grandmother â€“ who she grew up to resemble; but she was always known by her middle name â€“Euple. Perhaps her parents realized their blue-eyed daughter was an original and wanted an original name.

On Thanksgiving Day 1924 - her sixth birthday - Euple Blackburn arrived by train in Fairlie, Texas. For her remaining 94 years, she would live in or near the small farm community she loved and whose history she helped preserve. In 1977, with her dear friend Carolyn Burt, she compiled a family history, Days to Remember Sonora-Fairlie, 1850-1977. As a member of the Hunt County Historical Commission, she was instrumental in getting the state historical marker for Sonora Cemetery erected in 1984. Later, at a youthful age 80, Euple served with Carolyn on the committee responsible for publishing an area history, From Tall Grass to High Cotton Bailey, Celeste, Commerce, Fairlie, Gober, Wolfe City and Surrounding Communities. After graduating from Wolfe City High School, Euple Blackburn married Fairlie native, James Deward Walker, on December 10, 1940. The marriage lasted for 54 years until Dewardâ€™s death in May 1995 and produced three sons and three daughters. An honest and remarkably perceptive parent, Euple knew each childâ€™s talents and challenges and devoted herself to teaching self-reliance, discipline, personal integrity, and kindness. She didnâ€™t accept excuses, make any allowance for minor illnesses, or tolerate meanness, but was never too tired to help with homework, make a new dress for a special occasion, or put a good meal on the table. Her children and grandchildren simply adored her.

When the children were grown, Euple used her free time for church work and community service helping with the many worthwhile projects of the United Methodist Women, the Fairlie Ladies Club, and the Captain Charles Croxall Chapter of the Daughters of the American Revolution where she served a term as Regent. Into her 90s, Euple served as the treasurer of the Sonora Cemetery Association helping to see the cemetery was maintained and preparing for the annual homecoming. In 1990, Euple along with three other strong Blackburn women documented her family history in â€“ Our Blackburn Branch 1759-1989. Friends who know Euple best through her membership in the First United Methodist Church of Commerce and the Triple L Sunday School Class will not be surprised to learn that her family tree was chock full of Methodist ministers. She was the direct descendant of Reverend James A. Blackburn â€“ a veteran of the Revolutionary War - who in 1818 - with son Joel - founded one of the earliest surviving Methodist congregations in Alabama, and the 2nd great granddaughter of Anna Fry Blackburn. The same qualities noted in Annaâ€™s 1872 obituary including her â€œGodly walk and exampleâ€ describe Euple today. We could use the close of Annaâ€™s Christian Advocate obituary for Eupleâ€™s. â€œMany from the lowly walks of life shared her charity, and all within the bounds of her acquaintance called her blessed.â€

Participating in the service Monday morning will be granddaughters Tiffany Walker, Mandy Walker Wilson, and Mattie Walker. Following the service, Euple will be laid to rest beside her husband at Sonora Cemetery in Fairlie, Texas. The family wishes to thank Ms. Sharon Blakely, Ms. Brenda Lewis, and Ms. Erica Green whose love and devotion to our Mother is deeply appreciated. Also, our thanks go out to Dr. Rick Selvaggi, and the staffs of Country Home Estates and Oak Manor Nursing Home.

In lieu of flowers the family requests donations be made to Sonora Cemetery Association and the First United Methodist Church of Commerce.

To order memorial trees or send flowers to the family in memory of Flora Euple Walker, please visit our flower store.