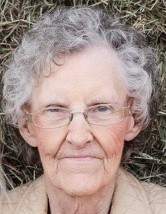 Elmona McWhirter, 86, of Wolfe City, Texas passed peacefully from this life at her residence on November 25, 2020. She was born in the Black Cat Thicket Community of Hunt County on November 14, 1934; the daughter of Walter Lee Malone and Goldie Miller Malone. Elmona was a graduate of Wolfe City High School where she had the distinction of being the valedictorian of her class. She married James C. McWhirter on November 30, 1955 in Durant, Oklahoma. Mrs. McWhirter served as office manager of Hennington Industries for 52 years before retiring. She was a member of the First United Methodist Church of Wolfe City and also served as a volunteer with the Wolfe City Food Pantry.

The family would like to express their deepest gratitude to Anew Hospice workers, Courtney Drew and Vivian King and to Hearts and Hands Homecare and the women at the First United Methodist Church in Wolfe City.

To order memorial trees or send flowers to the family in memory of Elmona McWhirter, please visit our flower store.