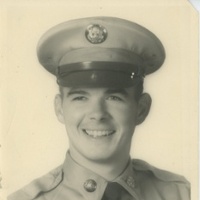 Eddie was born in Razor, Texas (Lamar County), on March 22, 1938, the son of Troy Haynes and Gladys Hicks Haynes. He was a retired Classified & Production Coordinator for the Dallas Times Herald. Eddie served in the United States Army as well as the Army National Guard of Texas, earning the rank of Major. He married Cindy Kopec on September 7, 1984 in Garland and they moved from Dallas to take up residence in Cumby in 1986.

He was a member of the First Christian Church of Commerce, Texas, the Masonic Lodge in Cumby, and the Hopkins County Republican Party. He enjoyed anything that had to do with history and wars, and also genealogical research as well. Eddie will also be remembered as being a "Master of Puttering".

"Hicks" is survived by his wife Cindy, two daughters: Karen Haynes Peacock of Royce City, and Christy Haynes Johnson of Dallas; other survivors include grandsons: Rocky Johnson and Beau Snodgrass and two great grandchildren, and a brother Bill Haynes of Paris, Texas. He was preceded in death by his parents, a sister, Margaret Haynes Jackson, and a brother, Robert Haynes.

The family will host a memorial service Saturday, August 3, 2019 at 2:00 p.m. at the First Christian Church in Commerce.

For those who would rather give a memorial donation instead of flowers, the family has requested that such donations be made to the First Christian Church of Commerce.

To order memorial trees or send flowers to the family in memory of Eddie Hicks Haynes, please visit our flower store.
Send a Sympathy Card