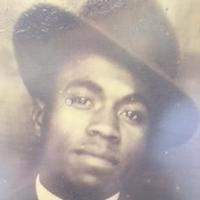 Eddie was born in Ladonia, Texas, on August 11, 1916, to Annie Bell and Lura Adams. He worked twenty-two years as a mechanic at Goodyear; and, after retirement, he went to work as a custodian for Fannin ISD. Eddie married the love of his life, Clemiel Elizabeth McFarland Adams, in Hugo, Oklahoma, on October 2, 1940, and they enjoyed over 76 wonderful years together.

He was preceded in death by his parents and his son, Donald Ray Adams.

Funeral Services will be conducted on Friday, February, 3, 2017, at 11:00 a.m. in Jones-Walker & Son Funeral Chapel with Rev. M.D. Massey officiating.

Interment will be at Pleasant Grove Cemetery in Ladonia

Pallbearers are Eddie's sons and son-in-law with the honorary pallbearers being his grandsons and nephew, John Noble.

To order memorial trees or send flowers to the family in memory of Eddie Lee Adams, please visit our flower store.