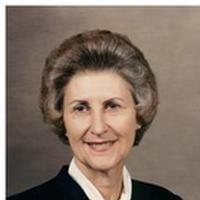 She is survived by her son, Jack Waters, and his wife, Kelly, of St Louis, Missouri, her grandson, Harrison Waters, and step-grandchildren, Raegan, Mike, and Ridley Austin, and Cory Lovell. She is also survived by five or her seven siblings, Mary Lou Davis, Cecilia Miller, Ray (Marilyn) Warlick, Troy Warlick, and Phyllis Miller, all living in North Carolina.

Margo, a graduate of Appalachian State and University of Mississippi, moved to Commerce, Texas, in 1974, to join the faculty at Texas A&M University Commerce, and retired in 1999 as the Athletic Director and Head of Health and Physical Education Department. She served in numerous leadership positions in the NCAA and NAIA, championing new initiatives for both men's and women's athletics. In 2013 she was honored by the American Alliance for Health, Physical Education, Recreation and Dance with the Pathfinder Award.

In addition to her professional accomplishments Margo lived a life of service to her family, community, and church. As a dedicated citizen of Commerce she was active in many organizations including the Chamber of Commerce, the Psychology Club, and as an organizer for the Bois d'Arc Bash. As a member of the First Baptist Church of Commerce, she served as Financial Secretary. She received numerous awards for her volunteer work including the 2002 Commerce Citizen of the Year Award.

Margo was beloved by her family and friends as much for her kindness and generosity as for her baking skills. Her gifts of baked treats for birthdays and special occasions were eagerly anticipated. She was a loving mother and grandmother who will be remembered for her playful spirit, radiant smile, and warm hugs.

A celebration of Margo's life will be held on September 12, 2015 at 2:30 PM in the Performing Arts Center on the campus of Texas A&M Commerce.

To order memorial trees or send flowers to the family in memory of Dr. Margaret Harbison, please visit our flower store.