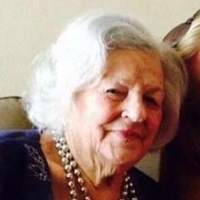 Mildred Doris Julian was born July 1, 1922 in Josephine, Texas to Jesse Lee Julian and Mabel Lacy Julian, and went to be with the Lord on January 24, 2019 at the age of 96. She was the second of ten children.

Doris was Past Matron of Edwin J. Kiest Lodge, which she enjoyed so much. She worked as a Medical Receptionist at Stevens Park Hospital for 20 years; then for a group of doctors for about 20 years. She tried to retire and stay at home but found she missed being with people, so she went to work for Sam's Club as a Door Greeter and later a Food Demonstrator, and worked there for over 20 years before finally retiring.

On January 29, 1965 Doris married James W. Snider (Jim), he preceded her in death. They had two children, Sherry (Snider) Rogan and James W. Snider, Jr. She and Jim spent many years enjoying hunting and fishing. They rode four-wheelers, had fish fries, and entertained many friends and family at their place in Tawakoni, or on their deer lease.

In 2010 Doris suffered a stroke and had to leave her home. She spent the rest of her life at Autumn Leaves in Casa Linda, where she was loved by everyone there.

Doris was a loving, giving person. Her family was everything to her. I am sure she is in Heaven, rejoicing with the angels, and trying to make all of them a key lime pie. That's just what she does! We will miss her.

To order memorial trees or send flowers to the family in memory of Doris J. Snider, please visit our flower store.