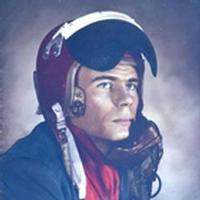 Donald was a Captain in the USAF and flew F-94C's during the Korean War. His identical twin brother, Herbert L. Leadley, also served in the USAF and flew as his wingman in the same squadron, the 96th Fighter-Interceptor Squadron. He was a winning contestant representing the Air Force in the TV Game Show "The $64,000 Question".

After his service in the USAF, he attended the University of Florida and received a BS in Electrical Engineering. Later, he earned his Brokerage License and worked as a manager opening brokerage houses throughout the Midwest. He co-owned and published the "Arabian Visions Magazine" with his wife, Jane Leadley. He and his wife, Jane, also owned the multi Champion Arabian Stallion, Task Force. Don loved Florida Gators football and NASCAR and spending time with his family.

Survivors include his wife, Edith Jane Leadley and his daughter, Mary Faith Janson.

He was preceded in death by his brothers: Richard B. Leadley and Herbert L. Leadley; and, his sisters: Ruth Leadley Boesel and Lalah Leadley Vondrachek

Funeral Mass will be celebrated on Wednesday, November 4, 2015, at 11:00 a.m. at Saint Joseph Catholic Church, with Father Marcus Chidozie as celebrant.

Interment with military honors will follow at Rosemound Cemetery.

Interment services with Military Honors will follow the Funeral Mass.

Interment services with Military Honors will follow the Funeral Mass.

To order memorial trees or send flowers to the family in memory of Donald L. Leadley, please visit our flower store.