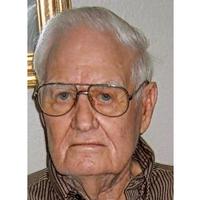 Davis was born in Needmore, Texas, on October 14, 1924, to Tinia Bowers Whitefield and Willie Johnnie Rex. He was a retired aircraft electrician for E-Systems (now L-3 Communications).

Davis was married to Mary Frances Billingsley Rex, who preceded him in death. Davis was a member of the Masonic Lodge and was a Deacon at the First Baptist Church of Pecan Gap, TX., Davis also proudly served his country in the United States Coast Guard during WWII.

Survivors include his son, Malcolm Rex and his wife Sandy of Spanish Fort, Alabama; his daughter, Lana Easley and her husband Mike of Klondike; his two grandsons: Wesley Haddock and Cory Rex; his granddaughter, Natalie Barnhill; his two great grandsons: Tanner Hall and Shannon Rex; and, his three great granddaughters: Tristan Rex, Alyssa Haddock and Avery Haddock, his sister-in-law; Pat Rex, and, several nieces and nephews.

He was preceded in death by his wife; his parents; his two brothers: W.J. Rex and Dale Rex; and, his sister, Minna Veda Jones.

Funeral Services will be conducted on Friday, July 10, 2015, at 11:00 a.m. at the First Baptist Church of Pecan Gap with Bro. Reuben Trussell officiating.

Visitation will be from 10:00 a.m. until service time at the First Baptist Church of Pecan Gap.

In lieu of usual remembrances, the Rex family is requesting that donations be made to the Alzheimer's Foundation, 4144 N. Central Expressway # 750, Dallas, Texas 75204.

To order memorial trees or send flowers to the family in memory of Davis Edward Rex, please visit our flower store.
Send a Sympathy Card