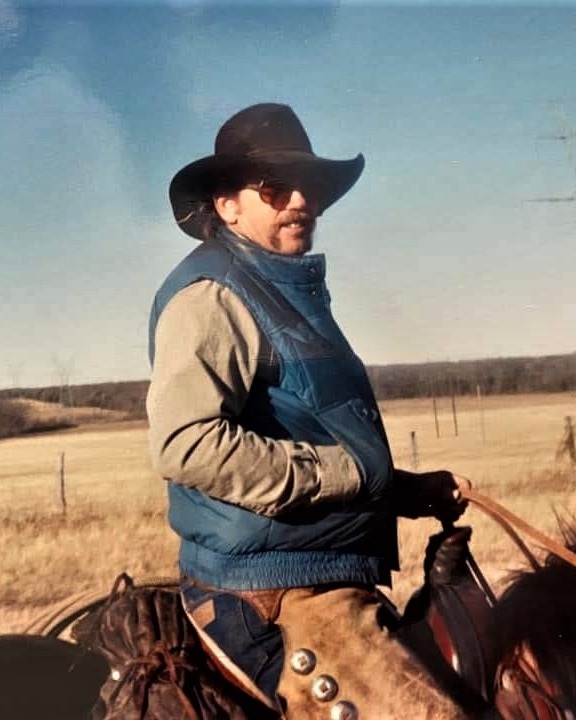 David Glen Holmes was born on December 28, 1954 to Jack Holmes and Elizabeth Prowse Holmes in Honey Grove, Texas.  He passed away from this earthly life to the big roundup in the sky on January 7, 2023 with his wife by his side. He fought a good battle but the cancer won the war.

David was a cowboy and always wished he had been born 100 years ago as he would have thrived as a wild west cowboy.  His passion and adrenalin rush was roping wild cattle in brush, thereby earning him the nickname of "Brush Popper".  He ate and lived the cowboy way and worked various ranches throughout his career; from Oklahoma to Sierra Blanco, Tx., while day working on the side. When he came to town to get a job, he became a detention officer for Lamar County for a short time and later for Fannin County.  He retired from Fannin County Precinct 3 running inmate crews.  It was in this job that he met his wife, Jill Hester Edwards, when she became the Purchasing Agent for Fannin County.  They were married on April 6, 2012 in Leonard, Tx. by the honorable Justice of the Peace for Precinct 2, Judge Alan Hale.  They enjoyed life raising horses and David doing his leather work in his leather shop.  He has left many a memory with his leather work that he has done for family and friends. He also loved to hunt and looked forward each year for the start of deer season.  He was known to cook the best calf fries you could eat until his bull nut supply dried up; when his black hat friend, Stewart Richardson quit cutting his bull calves and started banding.

He is survived by his wife Jill, mother Elizabeth Armstrong, son Justin McKenzie and wife Shannon, granddaughters: Aaly Campbell and husband Balon, Bailey Bigbey, and his adopted granddaughter, Haley Lawthon (that adopted him as her "Pappy" in 2001).  He is also survived by his brother Jackie Holmes and wife Cathy, sisters: Paula Loftin and husband Mark, Rhonda Barnes and husband Jimmy and Dendy Carter, numerous nephews, nieces, cousins and "The Black Hat Gang" that had many a cowboy gathering and good times.  He was preceded in death by his father, Jack Holmes, stepmother, Ruth Holmes, stepfather, Bill Armstrong, sister Laquita Blevins and brother-in-law, Bill Carter.

A Celebration of Life for David will be held on Saturday, January 28, 2023, at 2:00 p.m. at the Fairlie Homeplace. The Black Hat Gang, consisting of Bill Wheeler, Michael Sherwood, Don Charles Smith, Stewart Richardson and Mickey Holmes, will serve as honorary pallbearers. Other honorary pallbearers include Jeff Hill, Casen Hill, Thomas Hawley, and Dewayne Strickland.  This service will be followed by an inurnment at Allen's Point Cemetery in Honey Grove, Tx on Sunday, January 29, 2023, at 2:00 p.m.

The last official Black Hat Gathering was held on Saturday, September 10, 2022, with the stories being enjoyed by all that attended and it did get a little deep at times. He will be greatly missed by his wife, family and friends---"Ride High Cowboy".  The next Black Hat Gathering will be held at a later date when the grass turns green and the south wind blows.

I've heard it said that old cowboys don't die, they get put out to pasture way up in the sky so if God's got a heaven for old Cowboy legends, I hope the grass is greener on the other side and he's got a good horse to ride.

To order memorial trees or send flowers to the family in memory of David Glen Holmes, please visit our flower store.