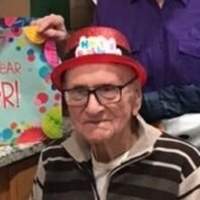 Marvin Braddock was born on December 9, 1916 and raised in Baldwin, FL where he lived most of his life surrounded by lots of family and friends. Marvin is son of the late Clarence Edward and Maybell Sauls Braddock. Marvin was called to his heavenly home on January 21, 2020 where he joined his wife of 80 years, Mary Frances; two sons, David Oliver and Albert Mitchell Sr. and all twelve of his brothers and sisters. He is survived by: son, Butch (Lynda) Braddock; two daughters-in-love, Waverly Braddock and Dianna Braddock; seven grandchildren, David (Elizabeth) Braddock, Mark (Glenda) Braddock, Kris (Yvette) Braddock, Mitch Braddock, Cheri (James) Wheeler, Michelle (Teddy) Maynor; Tracey (Brett) Millar; sixteen great-grandchildren; one great-great-grandchild; numerous extended family and friends he called family. Marvin was a long haul truck driver most of his adult life that loved telling stories about Route 66 when the road was young. First Baptist Baldwin was the church family he truly loved. Clarence was a WWII veteran, serving in the U.S. Navy as a Seaman Second Class. He was cantankerous half the time and stubborn the other half but loved all the time.

Mr. Braddock will be going back to his home State of Florida for burial. Those arrangements are pending.

To order memorial trees or send flowers to the family in memory of Clarence Marvin Braddock, please visit our flower store.