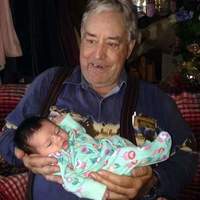 Byron Dale Richardson,72, of Commerce passed away at his residence on Sunday, November 17, 2019.

Byron was born in Portland, Oregon on March 26, 1947 to Arthur Richardson and May Scott Richardson. He served in the U.S. Army from 1966 until 1968 and then in the Army Reserves until July 19,1972. He received the National Defense Service Medal and a Sharpshooter (Rifle M-14) designation while serving. He loved the outdoors and was an avid hunter and fisherman. Following the service, Byron worked in the trucking industry before retiring after forty years as an over the road truck driver.

Mr. Richardson attended the Top Rail Cowboy Church in Greenville and two of his favorite hymns were Amazing Grace and How Great Thou Art.

He was preceded in death by his parents and a brother, Colby Richardson.

Services will be held at a later date at the DFW National Cemetery.

To order memorial trees or send flowers to the family in memory of Byron Dale Richardson, please visit our flower store.