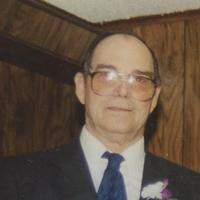 Billy Strickland, 89, of Cumby passed away on Wednesday, February 1, 2017 in Greenville.

Billy was born in Campbell, Texas, on August 29, 1927, to Flora Merinda Bowen and Claude Luke Strickland. He was a truck driver and a Methodist minister. Billy was married to Frances Charlene Latham Strickland, who preceded him in death. He was a United States Army veteran serving during WWII. Billy was a member of Cumby United Methodist Church and he was an avid reader and music lover.

He is preceded in death by his wife; his two daughters: Flora B. Hazelwood and Claudette Caldwell; his three brothers: James Ray Strickland, Earl Dean Strickland and Jerry Strickland; his three sisters: Mary Claxton, Jean Rose and Linda Sheffield; and, his parents, Flora and Claude Strickland.

Funeral services will be held on Sunday, February 5, 2017, at 2:00 p.m. at Jones-Walker & Son Funeral Chapel with Bro. Duncan Graham officiating.

Interment with full Military Honors will follow at Friendship Cemetery in Cumby.

To order memorial trees or send flowers to the family in memory of Billy Claude Strickland, please visit our flower store.