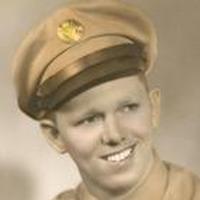 Bill served in the United States Air Force during WWll. He enjoyed his work as a carpenter and helped construct many buildings in Dallas. He was a member of Capenters Union Local 198 for over 60 years.

He is survived by his daughter, Kerri Towne and her husband Steven; four grandchildren: Rev. Erik Towne of Ann Arbor, MI, Heidi Johnson of Garland, TX, Chris Towne and his wife Clara of Rockwall TX. and Elizabeth Towne of Dallas, TX; his two great-grandchildren: Maddie and Caitlyn Johnson; his nephew, Jim Moore of Lincoln, NE; and, his nieces: Deedie Strack of El Paso, TX, Marilou Steaniec of Garland, TX, Valreeda Gaiennie of Dallas, TX, and Lora Reese of Mesquite, TX.

Bill is preceded in death by his wife, Dorothy.

Graveside services will be held at Rosemound Cemetery in Commerce on Wednesday, December 10, 2014, at 11:00 a.m. with Dr. Jeff Johnson officiating.

Donations in Bill's memory may be made to Habitat for Humanity.

To order memorial trees or send flowers to the family in memory of Billy W. Moore, please visit our flower store.
Send a Sympathy Card