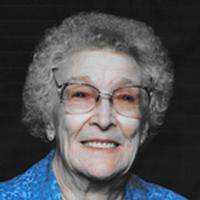 Bertha Lee O'Neal, 94, formerly of Commerce passed away on Tuesday, December 29, 2015, in Greenville.

Bertha was born in Campbell, Texas, on October 25, 1921, to Trixie Lee Mosley Smithers and Jessie Houston Smithers. She was married to James Winburn O'Neal, who preceded her in death. Bertha enjoyed quilting, painting and embroidery.

Survivors include her two sons: Jackie Wayne O'Neal of Tennessee and Danny Ray O'Neal of Commerce; her eight grandchildren, her twelve great-grandchildren and her brother, Jessie Houston Smithers Jr.

She was preceded in death by her husband, James, her parents Trixie and Jessie Smithers, her son, James Lee O'Neal; her grandson, David Alton O'Neal, and, her granddaughter, Kenberly Paige O'Neal.

Funeral services will be held at 2:00 p.m. on Sunday, January 3, 2016, at Jones-Walker & Son Funeral Home Chapel with R.J. Nanny officiating.

Interment will be in Alba, Texas.

To order memorial trees or send flowers to the family in memory of Bertha Lee O'Neal, please visit our flower store.