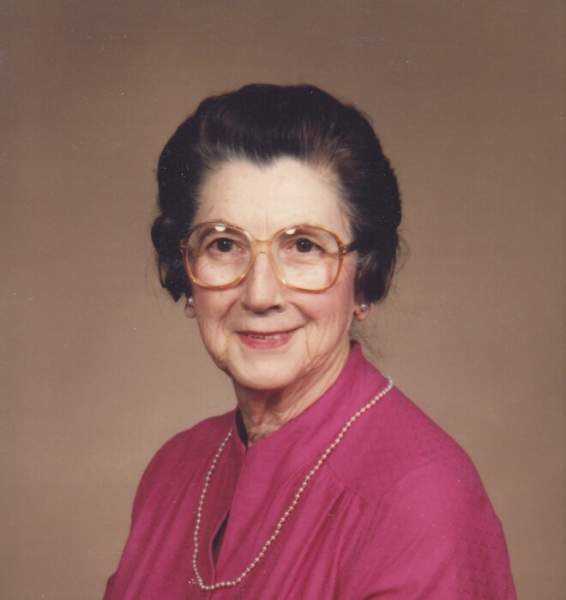 Audrey Faye Robnett Little, 105, passed away peacefully last Sunday morning October 11, 2020, and went home to be with her Lord.  Audrey was born March 30, 1915, on a farm in the Shiloh community near Klondike, Texas, the sixth of ten children born to Rev. Robert Bruce and Mary Emmaline Robnett. Only nine siblings survived infancy, with baby brother Alfred Benton dying in 1920. Being reared in a Christian home under the influence of her minister father, Audrey, like her nine siblings, was taught the essential Christian values of love, harmony, honesty respect, and cooperation.  She learned at an early age that she was expected to embrace these principles while extending them in service to others.

Audrey’s father was held in high esteem in their community, and his church members expected his children to be examples of impeccable character.  Audrey learned to respect his authority.  His wise counsel was truly a guiding light throughout her life.  As a teen-ager Audrey professed her belief in Christ at a tent revival.  That was the most important decision she ever made, for it changed her perspective forever.  She became active in church work and was a leader of the youth group.  She lived out her faith by letting her spiritual light shine as a devout Christian throughout her life’s journey.

Audrey received her early education in the rural school at Shiloh.  From the first day she started school in 1922, she always had a desire to become an elementary school teacher.  In 1936, she borrowed $400 for room, board and tuition from her sister Jane, who was a teacher, and enrolled in East Texas State University, now Texas A&M at Commerce.  In the College Glee Club during the summer of 1936 was a handsome blond bass singer name Alfred T. Little (Bud), who was no stranger at all, but a man from Shiloh, her former high school sweetheart, a man whom she was now interested in dating again.  In fact, she set her cap for Alfred and hoped to marry him in God’s good time.

By 1939, Alfred T. Little was a blond, tall, 6’4”, handsome basketball coach and principal in Ben Wheeler.  In March he proposed marriage to Audrey, saying that if she would marry him he would help her get a job teaching first grade in Ben Wheeler, which he did by arranging for her to take a bus to Ben Wheeler to be interviewed by the superintendent and school board.  She was hired that evening. In May, she received her bachelor’s degree in elementary education.  On August 25th she married Alfred, the most handsome young man in Texas, at the Methodist preacher’s house in Klondike.  They drove to Hot Springs, Arkansas, where they spent their honeymoon.  In September after Labor Day, Audrey began teaching first grade in Ben Wheeler, where Alfred was the principal that year, and later served three years as superintendent.

In 1969, Audrey and Alfred moved back to Austin, where Alfred accepted an executive position at the Texas Education Agency. Audrey became certified at UT in early childhood education and kindergarten.  She resumed her teaching career, first at Cunningham, then at Walnut Creek, and finally at Webb Sixth Grade Center.  She retired in 1977, after 27 years of service, all the time serving as a strong role model for her students to emulate.

In 1985, Audrey began another career as caretaker and nurse for the family.  When her husband Alfred became ill with Parkinson’s disease and was bed-ridden for eighteen years, she took care of him at home with the help of her family and her home health aides until his death in 2003.  Audrey took this burden and turned it into a blessing while learning some of life’s greatest lessons.  Love and duty kept her motivated as she remembered her wedding vows:  In sickness and in health till death do us part.  She had an extraordinary love for her family, for her daughter Patricia and son-in-law Ben and especially for her three grandsons Brian and twins Robert and Richard.  They were the pride and joy of her life.  In 1993-94 when her daughter Patricia was recovering, and eventually did recover, from congestive heart failure, Audrey picked them up from school every day and took them to their piano lessons on Tuesdays.

Audrey had a great spiritual influence on their young lives that has continued into adulthood.  In 2007, Audrey, age 92, invited her 96-year-old sister Jane from Commerce to move in with her to share a household.  She cared for her aging sister until Jane’s death at age 102.  Audrey was a long-time member of St, John’s Methodist Church. There she was a member of the U.M W and the Fellowship class, in which she taught Sunday school for several years.  She was an avid Bible reader and had a treasure trove of memorized verses as well as poems including poems she had written herself, ready on demand.  Audrey was a strong, stalwart Christian matriarch, a mentor who left indelible memories in the minds of all who knew and loved her.

Thanks to all the nurses and caregivers who gave her such compassionate and professional care during her six-week stay at Brookdale nursing center and hospice, including Linda, Sharon, Jennifer, Courtney, Jo, Monica, Karen, Marcette, Gloria, Clarissa, Sarah, and Becky, among others of their wonderful staff.  Thanks also to Rev. Cheryl Broome and Rev. Hillary Marchbanks, from St. John’s Methodist Church, for their pastoral visits.

Audrey is survived by her daughter Patricia Boswell and her husband Ben, grandsons Brian and Robert Boswell, all of Austin, and grandson Richard Boswell and wife Ann Marie, of Pflugerville, one sister-in-law, numerous nieces and nephews, and their families, as well as a host of cousins and friends.

Audrey was preceded in death by her husband Alfred T. Little; her parents, Rev. Bruce and Emma Robnett; her seven brothers Riley, Elbert, Eldon, R.B., Clifton, Ray, and Alfred Benton (who died in infancy) Robnett; and two sisters Effie Moore and Jane Hartman. She was the last leaf on the tree, meaning the last surviving sibling on the Rev. Bruce and Emma Robnett family tree.

Private family burial and graveside service:  Shiloh Cemetery near Commerce, Texas at 10:00 A.M. Saturday, October 17, 2020.  The body may be viewed; 4-6 PM. Friday at Jones-Walker Funeral Home in Commerce.  No flowers, please. If you wish, you may donate in memory of Audrey to the memorial fund of St. John’s United Methodist Church in Austin or to the scholarship fund of the Austin Retired Teachers Association (ARTA).  The ARTA Foundation gives scholarships to high school seniors preparing to teach. Donation forms are available on the ARTA website (http\\localunits.org/austinrta/index.cfm/forms/arta-foundation-fund-donation) and may be downloaded, printed, and mailed to Linda Harvey, ARTA Memorial Scholarship Foundation, P.O. Box 143483, Austin, TX 78714.  Donations to St. John’s United Methodist Church may be made on their website: https://stjohnsaustin.org or by mail to St. John’s  United Methodist Church, St. John’s Memorial Fund, c/o Rev. Hillary Marchanks, 2140 Allandale Road, Austin, TX 78756

A private family memorial service will be held in Austin on Saturday, October 24, 2020 at 10:30 A.M. To access this live-streamed service go to wpcaustin.org/worship/service/ and click on the Facebook Live or the YouTube Channel link.

To order memorial trees or send flowers to the family in memory of Audrey Faye Little, please visit our flower store.