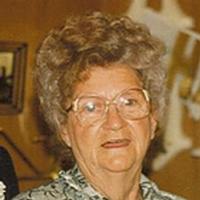 Annie was born in Cumby on October 7, 1919, to Gladys Clemie McGowan Blunt and Judson Thomas Blunt. She was married to Vester H. Pickens, who preceded her in death. Annie Pauline was a hairdresser for many years; and, even after retirement, she continued doing hair wherever and whenever she was needed. She also enjoyed going to the Cumby Auction and loved all types of animals. Annie was a very devoted mother.

She is survived by her two grandsons: Richard Pickens Jr. and Jeff Pickens; her two granddaughters: Rae Lynn Norton and Taron Pickens; and, several great-grandchildren. Other survivors include her three brothers: J.T. Blunt, of Talco,Tx., Bill Blunt, of Garland, Tx., and Luke Blunt of Rockwall, Tx.; and, her three sisters: Margie Stewart, of Sunnyvale, Tx., Donnie Embrey of LoneStar, Tx., and Judy Pollan, of Dangerfield, Texas.

She was preceded in death by her husband; her two sons: Richard L. Pickens and Bobby J. Pickens; her parents: Gladys and Judson Blunt; and, her three sisters: Betty Blunt, Ruby Clifton and Grace Hollmer.

Burial will be in Long Cemetery in Cumby.

To order memorial trees or send flowers to the family in memory of Annie Pauline Pickens, please visit our flower store.
Send a Sympathy Card