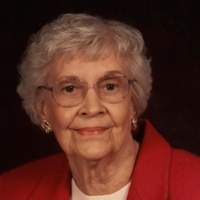 Alma Loretta Jones left this world to be with her Heavenly Father on September 22, 2018, just shy of her 101st birthday. She was born on November 2, 1917, in Merit, Texas, to Mack Wilmeth Pugh and Eva Mitchell Pugh. The family later moved to Greenville where she attended Greenville High School and graduated in 1935. In 1936, she married Houston Jones, a licensed mortician. They lived in Deport, Texas, and later moved to Commerce where they acquired a Funeral Home, known as Jones Funeral Home. In 1948, she received her Directors License and she assisted her husband in operating the funeral home. Houston Jones preceded her in death in 1978. She was the last surviving daughter of the six Pugh daughters.

She was preceded in death by her oldest daughter, Betty McKenzie in 2009 and her sisters: Jessie LaFavers Rainwater, Mabel Biffle, Alvis Roden, Stella Stonestreet Sampson, and Maxie Gilmore.

Funeral service will be held on Tuesday, September 25, 2018, at 2:00 P.M. at Creekside Church of Christ in Greenville. Officiating Minister will be Randy Daw.

Burial will follow at Memoryland Memorial Park in Greenville.

To order memorial trees or send flowers to the family in memory of Alma Loretta Jones, please visit our flower store.