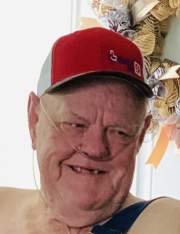 Albert Gene McElroy Sr., 77, of Honey Grove, Texas passed away at Paris Regional Medical Center on August 10, 2020. "Gene" was born July 27, 1943, in Honey Grove, the son of Homer Lee McElroy and Vera Mae Shortnacy McElroy. He married Jessie Reed McElroy and she preceded him in death; they had three sons: Danny Eugene McElroy of Aransas Pass, James Donald McElroy of Bonham, and Gene McElroy Jr. of Honey Grove.  Gene was a retired farmer that loved working the soil and making it productive, hunting and fishing. He also had a great love for his family, and was so proud of his kids and grandkids.  He was a member of the Sash Assembly of God Church.

He was preceded in death by his wife, parents, and three sisters: Loneta Kinison, Pauline Berry, and Irene Walker.

To order memorial trees or send flowers to the family in memory of Albert Gene McElroy, please visit our flower store.